Towels are always walking off in my kitchen. They NEVER stay in place. And with two small children, we need to wash and dry our hands often!

I ran across a blogpost that had a similar idea with a cup towel… just fold it over and add buttons.

While I LOVED that plan, my OCD brain couldn’t handle it… because I knew one side would be wrong side up as far as the hem was concerned. This person actually cut the towel and reversed the top portion to avoid that very problem. That gave me a fun idea…

So, I bought two towels that were coordinating colors and cut them in half.

I then lined up the towels, being sure that the hem was facing as I wanted it to… both hems should be the same direction, with the raw edge of the towels together. This will be where you’ll be sewing. 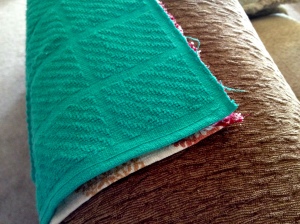 I then picked out cute buttons…

After sewing button holes and sewing on the buttons, I was THRILLED at the outcome. 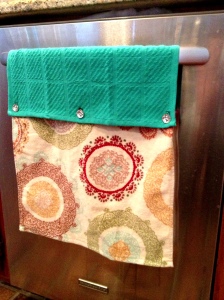 The entire project took about 30 minutes, and that was WITH juggling kids.

So yeah. Needless to say, I’ll be making 9 billion of these now.