I had been having contractions on and off for a week, but when I woke up Friday morning at 3AM, I knew something was different.  I woke John up and we timed a few of them…  they were 6 minutes apart and lasting for 2 minutes.

We drove quickly to the hospital.  I remembered being panicked that I would somehow be too far along and have missed out on my chance to get the epidural.  Yet once we arrived at the hospital and the panic wore off, my contractions lessened in strength and I stalled out at a 5.  My doctor, who had been on call all night, decided to break my water at 6:45AM.

Side note about my doctor:  she’s pretty amazing.  She had spent all day and night at the hospital Thursday being the on-call doctor.  Thursday night was a full moon.  There had been so many people going into labor and being induced that I couldn’t be induced on Thursday.  In fact, if my parents hadn’t opted to pay for the luxury suite (an early birthday present) we would have had to stay in one of the labor and delivery rooms because they were out of recovery rooms.  All of that is to say:  Dr. Staud had had a very exhausting night.  Instead of letting the next on-call doctor take care of me, though, she went home, took a shower, and came back in to deliver my baby.  THAT is dedication, people. 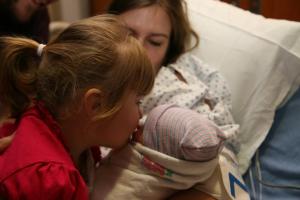 Anyway, back on track.  I have ALWAYS wanted an epidural.  This was my second childand I KNEW the pain involved with childbirth.  I also knew that I’m not a wonderful person when it comes to dealing with pain.  It was about 7:30AM that I had my epidural.  My pain had not reached the level it had with Claire, and I was thrilled that I would get to skip the more painful portion of labor.

Now, let’s talk about the anesthesiologist.  She seemed intelligent but flightly.  The insertion of the needle into the epidural space was significantly more painful this time than it had been with Claire (which was not painful AT ALL), but I reminded myself just exactly how worth it that little pinch would be.  About that point, the anesthesiologist gasped and said something to the effect of, “Aww, man…”  Those are not words you want to hear when you have a ginormous needle in your back and have been instructed to not move under penalty of death.  I breathed through my panic and quietly asked what was wrong.  She told me that she had threaded the catheter into a tiny vein.  Then she second guessed herself and decided to go ahead with the test dose. The nurse aurallyreported my blood pressure dropping, and I looked down to see my hands turning purple and shaking.  For what it’s worth, I don’t think she administered the whole test dose before she realized that she was trying to kill me, at which point, she completely rethreaded the catheter with much better success. 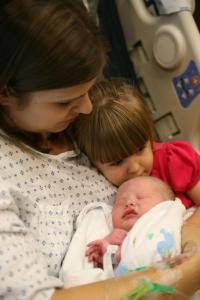 The way this particular hospital does epidurals (as most do) is to give a large “payload” dose at the beginning and then several smaller doses are administered continuously through a catheter that has been placed in your epidural space.  The largest dose they gave me was not enough to completely take away all of my pain, and it left a huge blind spot on my right side that still felt everything.  This was VERY different than what I’d had with Claire–at that point, I had felt NO pain whatsoever.  Still, I thought to myself, ‘This is bearable,’ and I didn’t complain.  I did let my nurse know about my blind spot, but I also told her that I was relatively unconcerned with that.  I did NOT realize that the large payload dose would wear off.

Somewhere in there, they began giving me a very small dose of pitocin through my IV, just to help my contractions along.  That definitely did the trick, and my contractions strengthened.  It was somewhere in there that I began to notice a substantial difference in pain.  I blamed the pitocin, then I blamed the new position I was laying in.  Finally, I complained around 10:15 or 10:30.  At first, I honestly don’t think the nurse believed me, until I looked right at her and started to chart my current contraction for her (“the contraction is setting in…now it’s peaking… now it’s easing off…”)  I also showed her that I could move one of my legs.  She went to go find the anesthesiologist.

Unfortunately, the anesthesiologist was in a C-section at that point, and she was the only anesthesiologist on call then.  The pain worsened.  Now, I had full feeling in both of my legs.  I could feel everything…  contractions, various monitors, the catheter in my back…  everything.  Terror started setting in.  I was NOT emotionally prepared to handle a natural delivery.  People kept saying to me, “Didn’t you practice breathing in one of your birthing classes?” to which I responded, “Yes, but I wasn’t in pain!  This is so very different!!!” 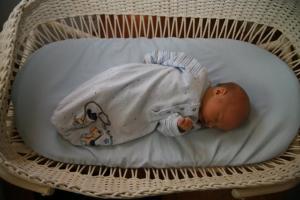 Thankfully, I had lots of support to help calm me and remind me to breathe.  John, Meredith (who was really able to clear-headedly remind me to breathe and relax), and my parents were there to comfort me and soothe me.  I definitely would have been sunk without their support. 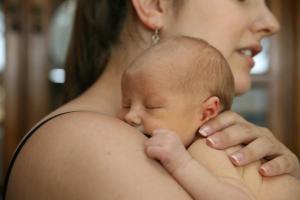 I didn’t have 7 minutes.

Dr. Staud checked me and found that I was crowning.  It was time to push.  There was no putting it off, no running away from it.  I can’t even begin to tell you how terrifying that exact moment was for me.  I screamed so loud in the first push that other nurses came in from the hallway to help calm me.  Thankfully, it was quick.  He was out in two contractions, which was 3 or 4 pushes.  The shoulders hurt much more than the head did, and the relief I felt when he was out was huge.  I’m pretty sure I sat in a traumatized puddle for a minute before I realized that I’d just delivered a baby.

Cameron was here!  John and my mom were torn between comforting me and oogling over him.  My panic and fear finally began to melt away enough for me to realize their conflict and release them to go be with Cameron.  Slowly but surely, I stopped shaking.  I stopped focusing on what I had just experienced, and I started focusing on Cameron.  He was a quiet little guy… he was perfect.

I would have never chosen this birth experience.  Even so, I have so much to be thankful for.  Cameron is so sweet, and he’s very healthy.  The amount of time that I spent in pain could have been much, much longer.  My mom and John’s parents were able to be here for the whole time…  they’d actually come in Thursday afternoon because we thought I was being induced then.  But probably most importantly, I got to see John in a completely different way… he was SO supportive and soothing.  I don’t think I could have made it without him.

Anyway, I thought I would share all of that with y’all.  🙂