I’m starting this post with the end result picture, just so you can know this story has a happy ending.

This entire disheartening experience began with the need to close off an awkward space that was in our den.  That space housed our dryer and my sewing machine armoir. 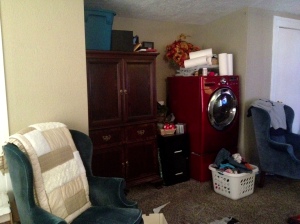 As you can see, really, I was just looking for a project to put off cleaning.

So I go to Ross.  I find a gorgeous, huge curtain rod.  Then I start looking for curtains.  If you’ve ever been to Ross, you know–it’s pretty hard to find two panels that are what you want AND match each other.  And as you can see from the above space, I was needing four panels.  In other words, I was looking for a miracle.

I had found three of a kind that were decent when I spotted two fabric shower curtains that were perfect.  At that moment, I was seeing the completed project.  I had already mentally named the blog post “How To Easily and Cheaply Hang Curtains,” and I was seeing my husband standing in awe of my handiwork with tears of wonder gleaming in his eyes.

At home, I quickly and easily hung the curtain rod.  Seriously, that was about a 15 minute project, and that was WITH small children “helping.”  Then I hung my shower curtains.

RULE #1: Pay attention to measurements.  In my case, that would have required me to have actually measured.  Meanwhile, my new “window” treatment reminded me of my middle school and high school days of desperately trying to find junior jeans that would fit my 5’10” body.  Oh, the teasing I endured over high-waters.

I’m fairly discouraged, but I run to Ross to find another shower curtain to patch to the bottom.  Luckily, I’ve added fabric to the bottom of curtains before, so I have a fair idea that it won’t look too ghetto.  A few hours later, during nap time, I take my new shower curtain, cut it in half, eyeball/measure to see the length needed… discover that I’ve somehow lost my pins….

By this point, I’m furiously annoyed.  I know there’s no way I can do a decent job without pins.  So I give in to the ghetto-ness of it all.  I didn’t even bother to remove the curtain from the rod; I just pulled the curtain up and started sewing.

I followed the pattern to keep it all as straight as possible without pins.  The end result with the first panel was surprisingly better than expected, so I did the second panel, too.

When I finished the second panel and stepped back to look at how it was hanging, my eye began to twitch.  I had sewn the seam backwards. How did I manage that?!  I double-checked to be sure that I was doing it right!!! I fumed to myself.  So I sat down and began the hour long process of carefully removing the seam.  As I finished, I saw what I had done… the panel had been hanging backwards.  I had just wasted an hour of my life ripping a perfectly good seam.

Rule # 2: Check and double check before sewing… and before removing seams.

At this point, I had concluded that I’d lost my mind and that I’m hopelessly dumb.  Tears welled in my eyes, and I became even more furious with myself for having an emotional reaction.  As I held the fabric I’d just removed and contemplated whether or not to sew it back on again, my son opened his door.  Nap time was over, and I would have a much needed mental break before finishing my project.

Later that evening after the kids had gone to bed, I re-sewed the seam exactly as I had before and re-hung the curtain properly.  Thankfully, that was the end of it.

The end result was pretty nice… the new curtains functionally covered the ugly, cluttered space, and the patterns of the two shower curtains complimented each other well.  I even got a small grunt of approval from my hubby. Meanwhile, my 30 minute project had completely taken over my whole day.

6 thoughts on “Hanging Curtains… learning from my mistakes”